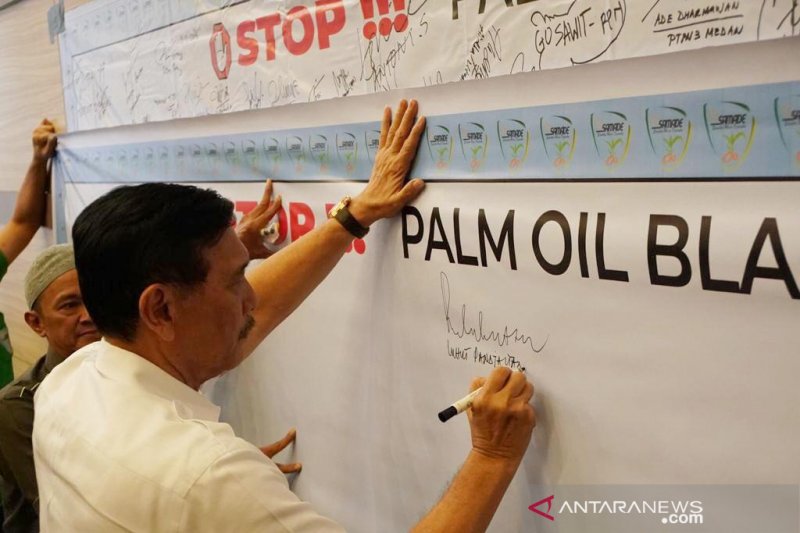 Indonesia has been working so hard to defend its national interests in facing the European Union’s ban on the use of crude palm oil for biofuels, Coordinating Maritime Affairs Minister Luhut Binsar Pandjaitan said.

CATATANJURNALIS.COM – Indonesia has been working so hard to defend its national interests in facing the European Union's ban on the use of crude palm oil for biofuels, Coordinating Maritime Affairs Minister Luhut Binsar Pandjaitan said.

"In facing the discrimination of several countries against our government in handling this CPO issue, we all must be solid," he told around 2,000 oil palm farmers of Labuhan Batu in North Sumatra Province, during his visit to the district area on Thursday.

During his visit to Labuhan Batu, known as one of Indonesia's main palm oil production centers thanks to the presence of state plantation company PTPN III, Pandjaitan said Indonesia would challenge any party hampering the country's palm oil products.

The government remains committed to defending the country's palm oil industries because they have a significant contribution to the efforts to decline poverty rate and absorb workforce, he said.

Therefore, if the European Union implements its ban on the use of crude palm oil for biofuels, the Indonesian government has prepared several options, including filing a complaint with the WTO and withdrawal from the Paris Agreement.

In response to this EU's ban, Speaker of the Indonesian House of Representatives Bambang Soesatyo deplored the decision saying that the EU had applied double standards in banning Indonesia's CPO commodity.

In responding to the EU's discriminatory decision, the House supports the Indonesian Government's necessary measures, including the possibility of filing a complaint with the World Trade Organization (WTO), he said.

The House and the government should walk hand-in-hand to face this challenge, Soesatyo said, adding that maintaining a good friendship with other countries is important, but preserving Indonesia's national interest and the interests of its people are above all.

The noted politician of the Golkar Party also hinted that a retaliation policy against the products of the EU member countries might be applied in response to this ban.

As revealed by media reports, the European Parliament had recently decided to ban the use of palm oil in motor fuels from 2021, as it was considered environmentally unfriendly.